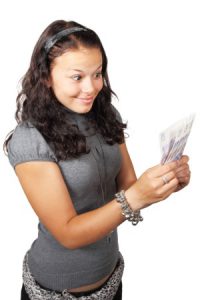 The money culture that surrounds us can make it difficult to achieve contentment.

The problem is that we live in a world of “have more” messages rather than “be more” messages. If we want to live a fulfilling, contented life, then this is an area where we have to swim against the cultural tide.

The most important step in addressing the imperatives of our culture is simply to become aware of them. However, it can be difficult to see our own culture because it is made up of things we take for granted. The easiest things to see are the ones that are unusual: things only stand out when they contrast with their background. It is much harder to see things that blend in – thinks like cultural norms – precisely because they are normal and commonplace. It takes a certain amount of effort, courage and determination to see the ordinary rather than the extraordinary.

One way to become aware of your own culture is to see your own world-view through someone else’s eyes. We could, for example:

In my experience, some of myths often expressed in Western money culture include the following:

Money Culture Myth: It is All About the Money

Most people will tell us that there is more to life than material wealth. Despite this, however, the message “It is All About the Money” is a popular one, broadcast by our culture in all sorts of subtle ways:

One of the most compelling examples of this message is Christmas: for many of our kids, Christmas is about the presents. And for many of us, it is about the shopping and the debt (which is partly why “peace and good will to all men” gets buried under “stress and grumpiness for all”.
Your life should be focused on people, not money.

Money Culture Myth: Your Wealth Determines Your Worth

Not everyone sees things this way, but this message is an undercurrent in many aspects of life:

A lot of people have the equation backwards. They do boring things so that they can have enough money to purchase what they think is extraordinary, and try to stand out that way. But it doesn’t work. We all know that status symbols are just symbols, and we instinctively try to peel back that layer of a person to figure out what they’re really about.Tynan

Money Culture Myth: You Are Poor

One of the most pervasive messages in our society is the idea that we’re somehow impoverished. This myth is particularly obvious in advertisements, whose sole purpose is to generate a sense of dissatisfaction that will seduce us into buying things whether or not we need them.

The truth is that, if we have adequate shelter, sustenance and a place to sleep, then we’re better off than a significant proportion of the people on this planet. We are not poor!

Money Culture Myth: If it Looks Good, it Is Good

One of the characteristics of a “have more” culture is an obsession with superficiality. The way things look becomes more important than what they are.

But is it better to look good or to be good?

Have we noticed this trend?

This myth is powerful enough that technology manufacturers deliberately hold back advances in technology so that we buy two upgrades instead of one?

But the truth is, value has nothing to do with age:

Having become aware of the money culture, we are in a position to evaluate it. We will find that it has both good points and bad.

Respond to the Money Culture

The good news is that we don’t have to live by the values imposed on us by our culture. When we are unaware of the messages that we accept without question, we become enslaved to them. But, when your eyes are opened, we;re free to make choices. Then, we can choose which aspects of our culture that we join in with, which parts to ignore, and which parts to challenge. Once we have seen our culture for what it is, we begin to live intentionally.

Don’t forget that we’re part of the culture, too. Because of this, an interesting thing happens when we make a choice about how we live: we begin to shape the culture. When we become content with less in a world obsessed with more, we influence others to think the same way. Not only do we become greater, but everyone else does, too.

The price of greatness is responsibility.