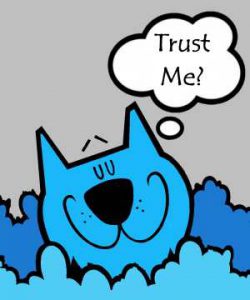 Being both trustworthy and credible is essential to your career, your business and your happiness.

I recently shared my view that credibility is essential in both business and personal relationships: beneficial interactions are based on trust, and trust cannot be established without credibility. In this article I delve deeper into the relationship between credibility and trustworthiness, and why both matter so much.

How Does Credibility Relate to Trustworthiness?

Trustworthiness is an objective fact: in principle you could measure the difference between what someone says is true and what is actually true, and between what they say they’ll do and their deeds.

Credibility is subjective. It depends upon the way you present yourself, and upon the accuracy of other people’s perceptions of you.

What are the Four Credibility Quadrants?

Broadly speaking, we can divide people into 4 groups based on their trustworthiness and credibility. Note that these categories are caricatures, but we’ll deal with that in the next section. In the mean time, see if you recognise any of these people:

Q1: Neither Trustworthy nor Credible

People in this quadrant are unreliable, and everyone knows it. You wouldn’t want to work with them or make friends with them, but at least we know who they are and you can avoid the mistake of wasting your time on them. Their one redeeming quality is that they’re honest about their dishonesty, even if they don’t mean to be.
Nobody want to be these guys.

Q2: Trustworthy but Not Credible

Sadly, people in this group will most likely feel lonely and undervalued. They often feel as if nobody ever really gave them a chance to shine, and they’d be right. These people are classic underachievers, undiscovered gems that are likely to remain so. They often end up miserable, angry and unfulfilled outsiders who never get the girl (or the boy), and who never get their due.
You really don’t want to be these guys, either.

People who appear highly credible but who are untrustworthy are the worst people to deal with in any kind of relationship.

In the short term, they develop strong relationships because they talk a good talk. But they don’t follow through. In the end the let everyone down and they’re always found out. But along the way they’ll waste everyone’s time and money and cause untold injury to the people they encounter. The break your heart, get you pregnant, make you responsible for their lives, take your money, eat your food, create more work to put right their mistakes and are generally make everyone’s lives a misery.

Over time, they’ll develop the reputation they deserve, and they’ll join the ranks of the “Not Trustworthy and Not Credible” group, but this can take time – especially if they move on frequently. As a result, these people are often superficial drifters and chancers who have the gift of the gab, but who can’t hold down a job nor establish long-term friendships.

These people are dangerous, and in the long haul they earn nothing but contempt. Heaven forbid you join their ranks.

Q4: Both Trustworthy and Credible

The members of this group are easy to trust and are worthy of that trust. They build valuable relationships most quickly, and are able to sustain those relationships over the long term. These are people you choose to work with – the manager you would choose, the co-workers you trust. They are the ones whose potential is recognised, so they have no trouble getting hired or promoted. In consequence, their salaries grow because their good work is appreciated. They also the people who build lasting friendships, because their worth is obvious and because they don’t let you down.

We all want to be one of these people, but the truth is that many of us struggle, either to be consistently reliable or to convince others of our reliability.
But, before we start addressing this struggle, we need to check our assumptions.

Is It Really That Simple?

As I mentioned above, these 4 categories are a caricature that don’t tell the whole story. There are several reasons for this. Although they apply to trustworthiness as well as credibility, I’ll focus on the latter here as that’s the topic that I’m especially interested in at the moment.

Credibility isn’t a black-and-white, all-or-nothing affair. Rather, we all have degrees of credibility: none of us is irrefutably convincing, and few are absolutely unbelievable. In other words, there is always some room for doubt in either direction.

Because credibility is a continuum, it is possible to rank people according to their credibility in a particular area. For example, witnesses to a crime can be ranked regarding their credibility on the basis of things like prior convictions, their reputation for dishonesty, known bias, motive to lie, intellectual capacity, consistency of statements, and physical limitations to hearing, eyesight and so on.

Bear in mind this ranking isn’t always accurate. As we’ve seen, credibility isn’t the same as suitability. Someone might appear to be a great bet as a potential employee, but may ultimately prove a poor investment. In contrast, someone may not look like marriage material, but would have made an excellent choice of partner.

People may find you credible in some areas but not in others. For example, they may recognise you technical skill, but find you less credible as a business partner. They might perceive you as financially astute, but doubt your ability behind the wheel of a car.

The specific method you use to establish credibility in one area may not work as well in another. For example, academic qualifications may go a long way if you want to lecture at a University, but serve you less well if you are looking for a job as a life guard.

Credibility Depends on the Observer

Not everyone will agree on your credibility. Some people may find you very credible, whereas others may not believe in you at all. People make judgements about your trustworthiness based on a wide variety of factors, and the emphasis people place on these factors will vary between individuals.

Many of the factors effecting someone’s judgement of you have little to do with you. For example, some people may be unable to trust you because they find it difficult to trust anyone. When it comes to establishing your credibility, there is little you can do about someone’s past experience of other people, about there prejudices and about mid-perceptions. Consequently, there may be times when you are unable to convince someone to trust you. Frustrating as this may be, it is just something we all face at one time or another. The only option we have is to accept this and move on.

Being trustworthy is important, but it isn’t enough. You also need to be credible if you want to fulfil your potential. I plan to discuss some of the ways that you can maximise your credibility in future posts, so watch this space!

One thought on “Credible vs Trustworthy: What is the Difference?”

Any clod can have the facts; having opinions is an art.