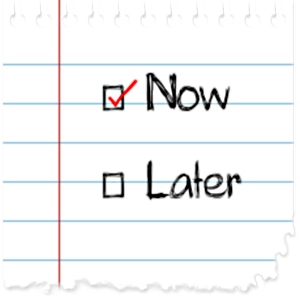 We’re all prone to putting things off. Following the four-step STAR process to overcome your procrastination and get things done.

Before you start trying to “fix” your procrastination issues, consider the following:

Now, I’m not advocating you take on every area of disorganization in your life all at the same time. On the contrary, if you do try to deal with every issue in your life all at once then you’re setting yourself up for a big disappointment. For most of us, perfectly reasonable to focus on procrastination, but to recognize that

If you’re a chronic procrastinator, you can’t expect to tackle the problem overnight. Old habits die hard, after all. Instead, take the steps where you can, and don’t worry about the more difficult stuff for now. If you make slow but steady progress, you will likely end up better off than someone who rushes to fix everything but who finds it all too much and gives up. Slow an steady really can win the race.

So, take one task at a time and deal with your procrastination on that task before moving on to the next.

Just because you’re putting things off, that doesn’t necessarily mean you’re doing the wrong thing. It would be madness to try to fit everything into today, so some things really do need to be left for another time. The important thing is to put off the right things for the right reasons.

Some of the legitimate reasons for putting things off can include:

Interestingly, each of these reasons can also be an excuse for delay. Indeed, I intend to revisit some of them when we deal with the strategies we can use to overcome our procrastination. Nevertheless, there are times when these are perfectly valid points, and the pain of procrastination is outweighed by the cost of doing the job today.

So, should I delay or should I proceed? I can’t tell you. The bottom line is that maturity comes when we take responsibility for our actions; for what we do and for what we do not do. We mus each evaluate the need to act or delay based on your own goals, values and resources. The important thing is that, if you do decide to put something off a little longer, do so intentionally rather than by default.

See also: Steve Pavlina: How to Fall in Love with Procrastination

Throughout the process of tackling procrastination, it can be useful to enlist other people’s help. Having someone to bounce ideas off someone else if that’s possible for you.

The STAR process can be effective in dealing with procrastination. STAR is an acronym for the 4 steps of the process: Stop, Think, Act and Reflect.

When it comes to procrastination, this step may seem counter-intuitive. Surely, we’re trying to get things done, not to stop! Often, however, we overlook the causes and results of our procrastination. By stopping and thinking about the things we’re putting off we can become more aware of:

Often, just stopping is enough to overcome an issue with procrastination

It is much easier to identify methods to overcome procrastination if we’ve identified the reasons for putting things off. In most cases, there is both a rational and an emotional reason for not getting things done. It can be very helpful to identify these before considering how to proceed. For example, there’s no value in deciding to “just do it” if the reason you’re stuck is that you don’t really know what you’re supposed to be doing.

Be aware that the obvious reason for not doing something right away may not always the root cause. For example, the obvious reason I’m putting off a job at work might be that I don’t really understand what is required of me. However, there may be a deeper reason. Asking “why” up to 5 times is a useful technique to determine the root cause of my delay.

I am putting off writing a paper.

I don’t really know what it is supposed to be about.

Because I haven’t clarified things with my boss.

I don’t want to talk to her.

I’m afraid of her.

She shouted at me last time I spoke to her.

Having got to the root cause of your procrastination, you need to think about what you’re going to do next. Sometimes the solution is obvious. At other times, you may need to brainstorm several ideas – perhaps with someone else’s help – before you come up with one that will work best for you.

In the example above, the reason for procrastination was (ultimately) my fear of my boss. If I decide to bite the bullet and just go and see her anyway, that could well be something that I find myself putting off again. On the other hand, if I decide to ask my friend to accompany me when I see her, that might be a lot easier.

The last step – one that is often forgotten – is to reflect on what I’ve achieved against my intentions. By looking for patterns in my successes and failures, I can become better informed about my own motivation, strengths and weaknesses. By asking whether my strategies are effective in overcoming procrastination I can improve my ability to overcome procrastination in future.

Sometimes I sit and think, and sometimes I just sit.