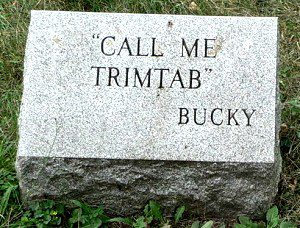 Buckminster ‘Bucky’ Fuller was an influential inventor and visionary whose ideas and inventions have inspired countless designers, architects, scientists and artists.

Inscribed on his gravestone are these simple words:

This enigmatic epitaph originates from an article published in the February 1972 issue of Playboy, where Fuller said:

Something hit me very hard once, thinking about what one little man could do. Think of the Queen Mary—the whole ship goes by and then comes the rudder. And there’s a tiny thing at the edge of the rudder called a trim tab.

It’s a miniature rudder. Just moving the little trim tab builds a low pressure that pulls the rudder around. Takes almost no effort at all. So I said that the little individual can be a trim tab. Society thinks it’s going right by you, that it’s left you altogether. But if you’re doing dynamic things mentally, the fact is that you can just put your foot out like that and the whole big ship of state is going to go.
So I said, call me Trim Tab.

Fuller realised that “one little man” (or woman!) can make a difference – even a big difference – and based on that realisation he set about becoming a person of influence.

Understand the Power of Small Changes

Other writers have supposed that being a trim tab is about making small positive changes within the organisation that you want to change. There is a great deal of truth in this: small positive changes are often a key aspect of bringing about change. However, that is only part of the story. The other part is that, for maximum impact, you need to position yourself where you can have most influence.

The trim tab is optimally positioned in relation to the whole of the system to bring about change. A trim tab doesn’t change the direction of the ship by itself. Rather, it influences the rudder, which in turn changes the direction of the ship. The message here is that, if you want to be a change agent within any given situation then you need to identify the influencers within that system and systematically set about having an influence on them.

Seek out the Influencers

Interestingly, the people at the “top” of an organisation are not always those with the most influence. Sometimes it is the boss’ secretary, husband or golf partner who really determines the direction of a company. In other organisations it is the finance guy or the IT director or the union boss who have most impact on the direction of the organisation. As a trim tab, your job is to find out who really has the influence and gently but firmly exert an influence on them.

Be Guided By a Higher Principle

The other thing to notice about a trim tab is that doesn’t move on its own. It is controlled “from above” by the captain of the ship. The problem with some organisations is that the movers and the shakers have no guiding principle. Instead, they may just follow the latest trends or band-wagons, or simply do whatever makes their lives easiest. A good trim tab, however, is guided by something more dependable. It is directed by an agent with a clear idea of their destination, who knows how to navigate these waters, and who has the experience to bring the ship through whatever storms beset their ship.

If you want to make a bigger difference, become a trim tab. The Trim Tab Principle implies that you influence people both directly and indirectly. The implication of this is that your influence is at least partly dependent on your position relative to other influencers.

Three Rules of Work: Out of clutter find simplicity; From discord find harmony; In the middle of difficulty lies opportunity.