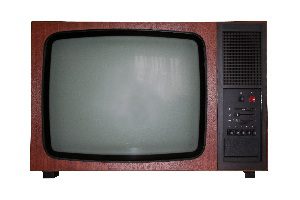 I have a confession to make: I don’t have a TV licence.

No. The thing is, I don’t have a television either.

Oh, I see. Look, I’ve recently bought a new TV. I’ve still got my old set in the spare bedroom, but I never use it…

Er, thanks. I am humbled by the generosity of friends and family when they offer to give me their old set or buy me a licence. But, the truth is, money isn’t the issue. The thing is, I don’t actually want a TV…

Me, weird? Absolutely. And I’m weirder than you think.

That explains it. I’ve looked at the rest of your blog, and I think you’re some kind of religious nut. I guess you think television is an instrument of the devil.

You looked at my blog?

Yeah. And if that’s the stuff you publish…
Man, I hate to think what goes on in your head when you’re on your own.

You’ve got a point, there.

And, I guess you could call me ‘religious’, but really, I don’t think television is an instrument of anyone in particular. Admittedly, I do think that some of the things shown on TV ought not be shown, or at least shown after the children have gone to bed. But that doesn’t mean I think TV should be banned or anything. Actually, I watch quite a lot of TV with other people – when I visit my mum, for example. Like everyone else, I think that there are good programmes and bad programmes, quality shows and 3rd rate shows, funny comedies and un-funny comedies, programs that challenge my opinions and programs that reinforce them. In fact, given half a chance, I’d watch quite a lot of TV.

You like TV, but you don’t want a TV? I’m confused.

The fact that I like TV is actually the problem. I just couldn’t turn the stupid thing off. There’s always something else to watch, and it always seems more important than the things I’m supposed to be doing. So I am better off without it. Frankly, I hardly ever miss it.

What about the news? I couldn’t live without knowing what’s going on.

We don’t live in the dark ages, you know! We still have digital radio and internet access. We still talk to people.

But what about The Simpsons, 24, CSI, Dr Who and all those other great shows? Don’t you miss them?

Like I say, we watch quite a bit of TV with other people, and we do  see some of these shows. We also watch a lot of DVDs (on the PC) – either we buy them, hire them or borrow them, and we watch stuff on iPlayer.

You’re married aren’t you? How does your wife feel about all this?

But when your son is older. You’ll have to get a TV then, won’t you?

Possibly, but I doubt that. People told us that when he was born. He’s 7 now, but we still don’t have one. I’m not saying never, but I’ll not be buying one any time soon.

In the mean time, we enjoy so many benefits of not having a TV.

Hey, I’ve got a TV and I think for myself, too!

I’m not saying you don’t! I am just saying that the quality of my thinking has improved since I quit the habit. I don’t rely on TV to tell me what life is all about. Instead, I am more likely to observe real life and think about it for myself.

That’s all very well for you, but I would never give up my TV.

I’m not asking you to. But I think Ed Cole had a point when he said:

Television is like a thief. It steals time; it kills initiative; it destroys relationships.Ed Cole

A version of this post was originally published in April 2008 on my old blog.

It is now 2018, and we’ve had a TV licence for about 18 months, now. We still don’t watch broadcast TV (almost never, anyway), but we do watch box-sets and catch-up on shows that we like on iPlayer, so we need a licence. Honestly, I think we’ve lost something… but we’ve gained other things. We had no TV for over a decade, and I think we had a good quality of life without it. But things change, and that’s OK.

Many of the best successes are directly related to failures. Don’t be afraid to fail because every failure is a lesson, a stepping stone on your way to success.