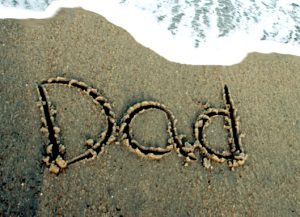 Is it disrespectful for my son to call me by his first name? Or should he call me “Dad”?

Recently, I was engaged in a discussion on what sons call their father, specifically whether or not it is disrespectful to call your father by his first name.

This got me thinking about my own preferences. On the odd occasion that my son, JB (now 9 years old) has called me by name, I have objected and asked him to call me “Dad” instead.

Is this a respect thing?

To be honest, it never occurred to me that my son was being disrespectful when he has called me by name. Rather, I think he’s just been copying what other adults call me, which is just what children do. It is not as if my name is a swear-word, and it is far more polite than a lot of the things that JB calls me when we’re messing about together.

In part, because I always called my father “Dad”, too. I never really thought about why, as it would never have occurred to me to do anything else. So I suppose it just seems natural for me to ask my son to do the same for me.

But is there something else?

Having thought about it, I realize that the best reason for having JB call me Dad isn’t so much the respect thing as it is an intimacy thing. You see, any one of my friends or colleagues can call me by name, but my son is the only person who has ever had the right to call me “Dad”. It is a special relationship that nobody else in the world can enjoy, and I think that’s something to be cherished by both of us.

So, being Dad has nothing to do with respect?

The first way I can do this is by being an example of someone who shows respect to others. One of the main ways that children learn how to behave is from the adults around them. I admit this is a sobering thought, given that I’m one of the adults JB is going to copy. The obvious starting point, then, is for me to demonstrate respect both for his mother and for him.

The second way I teach respect is by encouraging my son to respect adults. me included. When it comes to me, I need to create an environment where he can make mistakes without jeopardising our relationship. I need to develop enough self-respect that I don’t depend on a 9-year-old to bolster my self-esteem. Of course, I also need to live a life that’s worthy of his respect, which is a lot easier to say than to do.

What are you saying?

The title of “Dad” is not about my son respecting me, but about me respecting the fact that, as a father, I have responsibilities towards him. As such, being “Dad” is a hard road to walk. It is a role at which I constantly fail; but at the same time, it is one that I wouldn’t trade for the world.

Purity and simplicity are the two wings with which man soars above the earth and all temporary nature.