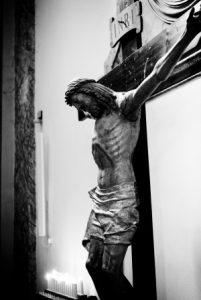 It is Good Friday, the day when Christians celebrate the judicial murder of an innocent man named Jesus.

I quite understand why the Christian Church makes people feel uncomfortable. It isn’t just the history of intolerance, the hypocrisy of its members, or way its leaders behave – taking money from the simple-minded folk who fill its buildings every week. No, those things are disquieting enough, but they are nothing compared to the intolerable discomfort invoked by that man at the heart of it all.

Of course, we they try to hide him behind the rituals and traditions, the cheerful songs and the quaint little homilies. But there he is, just as he always was, right dab in the centre of it all: that man, Jesus.
He always did make people feel apprehensive. Never one to shy away from controversy, he championed the cause of people who were downright unpleasant: traitors and whores, thieves and beggars, the deformed and the defamed. His followers always were the great unwashed, the illiterate and the ignorant. At the same time, he seemed to have naught but contempt for the authorities of his day – the priests, the lawyers and the leaders in the land. A revolutionary in the eyes of the people, is it any wonder that they felt a little threatened by this strange subversive?

Which leads me to the thing that makes really ill at ease: the message that he forgives me. Just like that. No merit on my part has earned his forgiveness, nor has he been fooled into believing that I’m someone else. Jesus just forgives me – a man in the crowd, a nobody, another voice whose cry of “crucify” would have nailed him to that tree.

So yes, I celebrate the day that Jesus died for me. And if that makes you squirm a little, so it should. It does me, too.