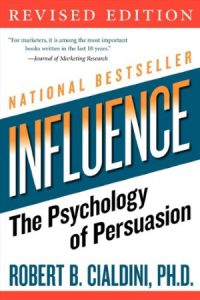 A summary of the introductory chapter of “Influence: The Psychology of Persuasion” by Robert B. Cialdini (Professor of Psychology at Arizona State University).

The Good Deal Principle says that people want to get a good deal, i.e. that we want to get the best and we want to pay the least. People follow this principle when they gather and analyse information before making a decision. We might be tempted to think that this is the principle that we follow when we make most of our decisions. Interestingly, however, this isn’t how many decisions are made…

A jewelery shop carried a range of turquoise jewelry that wasn’t selling. The owner had tried various common to promote the jewelery, but to no avail. She finally accepted that she would have to sell the offending items at a loss. Before leaving for a trip, the shop owner left a note for her assistant, asking that the price of the turquoise jewelery needed to be dropped whilst she was away. When the owner returned a few days later, she was not surprised to find that every item had sold. The remarkable point of this story is that the assistant mis-read the note, and mistakenly doubled the price of the jewelry.

Ethologists (scientists who study animal behavior in the natural environment) have observed that many species exhibit specific patterns of behaviour in response to a certain fixed stimulus. e.g. mother turkeys respond to the cheep-cheep of their turkey-chicks with typical mothering behavior. Other characteristics of the chicks (e.g. smell, touch, appearance) play little role in triggering the mothering response. The importance of the cheep-cheep stimulus is highlighted by an experiment involving mother turkeys and a stuffed polecat. Polecats are natural enemies of turkeys, so mother turkeys normally attack the stuffed polecat. However, when the stuffed polecat emitted a cheep-cheep sound, the mother turkeys responded with the same mothering behaviors as they would to a real chick. A similar phenomena occurs in a wide variety of species and include a wide range of behaviours including courtship rituals, feeding and defensive behaviors. “Fixed-action patterns” of behavior are typically triggered by very specific stimulus or “trigger feature”. For example, a male robin will attack a clump of red breast feathers as if it were a rival male, but it will ignore a near-perfect model of a robin that lacks the red feathers.
Sometimes humans behave in a similar way:

There are important differences between the automatic responses of humans and lower animals:

Why Do We Need Shortcuts?

The reason why we work this way is that it enables us to make decisions rapidly and with a minimum of effort. We need shortcuts to enable us to deal with a complex, rapidly changing world.We can’t possibly do a full analysis of every situation. Instead, we use “rules of thumb” (properly called “judgmental heuristics”) to help us identify key features of a situation and respond appropriately. The advantage of this strategy is that we conserve time and energy, but they can leave us open to both costly mistakes and to manipulation. Cialdini calls these responses, “click-whirr” responses.

When we ask someone to do us a favor we will be more successful if we provide a reason.

There was a queue for the copying machine. The experimenter asked if they could go in front of someone. The likelihood of being given permission to queue-jump depended on how the request was phrased:

When Do We Use Judgmental Heuristics?

We are more likely to deal with information in a controlled fashion when:

We are less likely to analyze when we are:

At these times, we are most vulnerable to manipulation.

If two items differ significantly, we tend to see them as more different than they actually are.

If we lift a light object first and then lift a heavy object, the second object is judged heaver than it would be if we hadn’t lifted the light one first.

Sales staff are instructed to try to sell costly items first, because the price of cheaper items will seem much lower in comparison.

Rule: “You get what you pay for”

… an example of a judgmental heuristic.
According to this rule:

Sales of Chivas Regal Scotch Whiskey “skyrocketed” when the price went up.

Solution to the Jewelery Shop Puzzle

The buyers of the jewelery were tourists who know little about the product. So they relied on the “You get what you pay for” rule rather than knowledge of the product.

Some of the most important rules that people tend use when making decisions are:

In the remainder of the book, Cialdini discusses in depth all but the first of these principles (he excludes the Good Deal principle because it is based on rational analysis of available information, and is therefore relatively immune from the kind of manipulation that is the main topic of the book).

2 thoughts on “Book Notes: “Influence: The Psychology of Persuasion” (Chapter 1)”

Don’t tell people how to do things. Tell them what to do and let them surprise you with their results.