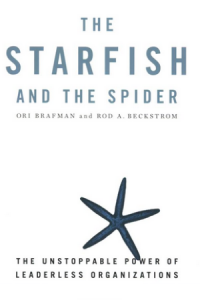 A brief summary of the book “The Starfish and the Spider: The Unstoppable Power of Leaderless Organizations” by Ori Brafman and Rod Beckstrom.

The starfish and spider in the title serve as a powerful metaphor for two types of organization, and illustrate the contrast between them.

The Spider represents the centralized organization. A spider is controlled by its head. Cut off its head and it dies.

The Starfish represents the decentralized network. It has no head, and its major organs are replicated throughout each arm. Cut it in half and you get two starfish.

How to Recognize Starfish?

The Five “Legs” of a Starfish

Each group is independent and autonomous. Everyone in a group is an equal, each contributing according to ability. Group membership is open and fluid – people come and go as they please. Instead of rules, groups depend on norms and developing trust between individuals.

Circles don’t form on their own. A catalyst is the person who initiates a circle. They develop ideas, lead by example, and inspire others. They then recede into the background, trusting the group to take appropriate action.

Ideology is the glue that holds a decentralized organizations together.

The Champion is an evangelist or salesperson for the group. Champions have excellent people skills, high energy and limitless tenacity. They relentlessly promote the group and its ideas.

Genuine Interest in Others

The Catalyst’s view is that people are full of interesting stories, like walking novels.

If you find someone boring it’s only because you, the listener, haven’t asked the right questions or found that person’s true passions.

[When someone] cares about what we’re talking about… we tend to open up and reveal more about ourselves.

… and this helps people to be open to new ideas.

When we feel understood… we are most open to something new.

Knowing so many people allows a catalyst to make connections between individuals who would otherwise never meet.

Catalysts have a strong sense of where people fit into their social networks – who people know, how they relate and how they fit into the Catalysts mental map. The Catalyst excels at making connections and forming new circles.

The fuel that drives the Catalyst is the genuine desire to help others.

A Catalysts passion results in action.

[A decentralized organization] can’t draw upon command-and-control to motivate participants, it needs a strong and ongoing ideology to keep them going.

Meet People Where They Are

The Catalyst is neither pushy nor persuasive. Rather, the Catalyst helps people realize their latent potential.

The Catalyst avoids giving advice, because that leads to hierarchy. Instead, the Catalyst inspires others to change.

The Catalyst trusts people to do what is right.

The Catalyst inspires others to work toward a common goal without material reward.

Catalysts accept that decentralization entails ambiguity. They know there are questions that can’t be answered – about the size of the organization, or about exactly who is doing what – and they use this uncertainty as an opportunity to be innovative.

Having lit the fire, the Catalyst gets out of the way, letting people figure out for themselves what to do and how to do it.

The Catalyst’s involvement dwindles as a movement takes off, allowing other people to take the lead and move their relationships forward.

The CEO vs the Catalyst

From Chapter 6:
When attacked, decentralized organizations become even more decentralized. This makes them difficult to kill.

Changing ideology isn’t easy. Force doesn’t work. Manipulation and control result is people becoming defensive and closed-off. Ideological change only happens when you demonstrate to people that you genuinely want to help them. Building that kind of trust takes time and energy.

If you can influence the network so that it concentrates power, prestige and property on a few individuals then it will centralize. This is because people want control over things that they own, and control requires structure.

The moment you introduce property rights into the equation, everything changes: the starfish organization turns into a spider. If you really want to centralize an organization, hand property rights to the catalyst and tell him to distribute resources as he sees fit.

Decentralize Yourself (If You Can’t Beat ‘Em … Join ‘Em)

Requires courage and innovation, as old strategies won’t work. Change the way you do business, as old sources oFor example, seeking revenues from alternative sources. Alternatively, becoming a hybrid organization, drawing on strengths of both.

From Chapter 7:
These are organizations that are neither pure spider nor pure starfish. Decentralizing elements of your business can help you stay competitive.

…by creating a network around your product:

Decentralize Parts of the Business

From Chapter 9:
“When the rules of the game suddenly change… it’s easy to be left behind”, and “the forces of decentralization have created a new set of rules”.

Traditionally, being big was considered safer than being small. The power that comes from being big outweighed the flexibility that comes from being small. But small size combined with a large network combines the benefits of flexibility and power. New markets are entered easily, and the organization can survive on minimal revenue. Costs are low, but influence is high. The small can rule over the large.

Each new member adds value to the whole network. Starfish organizations benefit more from this “network effect”. The cost of adding new members is tiny, and the value they add benefits everyone. Members stay loyal because they value the network.

Rule 3: The Power of Chaos

Organization and structure are often seen as essential to success. However, the unstructured nature of a starfish organization nurtures innovation. Good ideas gain momentum and get implemented and replicated.

Rule 4: Knowledge at the Edge

Starfish organizations can draw on the valuable information at the edges of the organization.

Rule 5: Everyone Wants to Contribute

People have a desire to share, and by doing so, add value to the community.

Catalysts are vitally important to decentralized organizations. They inspire people to action, map out the network and then they let go. If you can turn a catalyst into a CEO, the whole network is at risk.

Rule 8: The Values are the Organization

Ideology underpins a decentralized organization. Remove it, and the organization will collapse.

Despite their lack of structure, it is possible to take useful measurements of a decentralized organization’s health and results.
Counting individual members may be impossible; it is better to focus on circles:

…and the network as a whole:

Catalysts typically ask questions like these intuitively. They are not interested in reports or control. Instead, they care about members. They connect people, and “maintain the drumbeat of the ideology”.

Rule 10: Flatten or be Flattened

Increasingly, organizations find that they need to embrace decentralization in order to survive. The most effective strategy is, often, to be come a hybrid. This can appear messy, at first, but:

When we begin to appreciate their full potential, what initially looked like entropy turns out to be one of the most powerful forces the world has seen.

And some other online summaries: