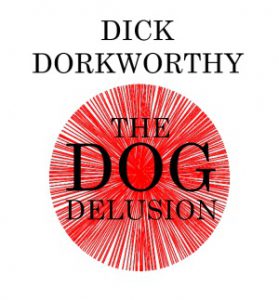 This is a guest post by Dick Dorkworthy, who wants us to believe that personal experience is a poor argument for the existence of Dogs.

Dick Dorkworthy is really rather good at not believing in things. He has a certificate and everything.

Today I’m going to show you another neat way to disbelieve in Dogs. Watch this…

Once upon a time, a friend of mine went camping. One night she heard a strange meowing noise. She was convinced that there was a Cat outside her tent. The sound was in every sense feline, so she jumped to the conclusion that it was a black Cat with white feet and a blue collar with a little silver disc on it. My friend said that this experience is one of the reasons she became a zoologist. Like me, she is a Cleaver Person.

I was completely taken in by this story, so I went to the pub where I told some Vicars about it. Two of them were parents, and they just laughed at me. “Kids!” they said in unison. One of them later explained that his children were so good at making meowing noises that they had earned themselves the title of, “Kids Who Sound a Bit Like Cats”.

Just because you think you have heard a cat doesn’t mean you’ve actually heard one, does it?

In a similar way, many people believe in Dogs because they believe that they have seen one. The argument from personal experience is very persuasive to the people who have that experience, but not to Clever People like me who are experts at not believing in things.

Someone you haven’t heard of once said,

The problem is that our brains don’t always work properly, and we make stuff up all the time. We see faces in clouds, we make up stories about animals that talk, and we see Dogs running around in parks. Your own brain is out to fool you. You can’t trust your perceptions. Your ears hear some noise and your silly old brain thinks you hear barking! Its like when I was a child and I thought I heard a mouse, but it turned out to be a squeaky wheel on my bicycle. I’m a Clever Person, and even I was fooled!

So, there you have it. Personal experience isn’t to be relied upon. If you think you have seen a Dog, don’t expect me to believe you, because I think you’re a first class nut-job. I’m gullible and easily fooled, too. Perhaps that’s why I refuse to believe in Dogs, and will continue to do so, even if I were to see one for myself.

Write it down! On the paper; out of the mind.