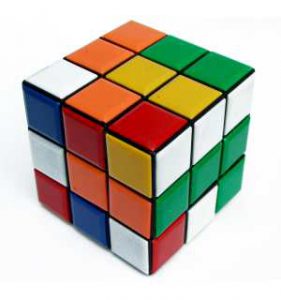 A little while back I discussed some of the problem solving strategies that my son and I have used to help him tackle his Maths homework. These “Rules of Maths”, as we call them, can be generalized to grown-up sized problems. Here are some of our latest discoveries:

If Jonathan is given the sum, “18 ÷ 2 =”, he might not be able to find the solution. On the other hand, if I were to give him 18 beads and ask him to share them between the two of us, you can bet he’d get the right answer fairly quickly. It is often easier to deal with concrete problems than it is to think about theoretical or abstract ones.

Of course, you can be flexible about how “real” you make things. For example, if you’re counting red cars you don’t have to go out and find real cars that happen to be red – toy cars do just as well, as do beads or bits of paper or crayons. Kids have great imagination!

Speaking of imagination, physicist Richard Feynman tells a story in about his use of “Make it Real” in the book, “Surely You’re Joking, Mr. Feynman!” (the story is called “A Different Box of Tools”). He recalls how he “gave a lot of trouble” to mathematics students during his time at Princeton be telling them that their subject was “trivial”. He would get the mathematicians to explain a complex and strange scenario to him, and then make a statement about that scenario. Feynman would immediately tell the mathematicians whether their statement was true or false. He achieved this apparently impossible feat of mental gymnastics by building a mental picture of the problem in his head… involving hairy green billiard balls or whatever… and then base his answer on whether or not the statement was true of his model.

Most adult-sized problems are similar. Moving house, for example, is a big challenge, but is much easier to handle if once broken down into steps like calculating your budget, deciding on a location, finding a suitable property and so on.

If the problem you’re working in is just too complex for you, why not try working on a simpler version of the problem? For example, figuring out the area of all the rooms in a house is quite an undertaking for Jonathan, but one room he can cope with.

In a recent article on his blog the brilliant Eric Lippert explains how this technique works for computer programmers. He suggests the following benefits of this technique:

Rule 8: Try Turning the Problem Around

A word of warning: not all problems work the same backwards as they do forwards (think subtraction, for example). Nevertheless, lots of problems do work well that way, and many are easier to solve in reverse.

(Of course, starting in the middle can work, too – as long as you can keep track of where you are and where you’re going)

Rule 9: Make Some Sort of Start

If all else fails, just start somewhere and see where it takes you.

For big puzzles, I often start with the easy bit. The benefits are:

If all else fails, just write out the question (Rule 4). At least you’ll get some clarity on what’s expected of you.

Big numbers are intimidating for Jonathan, but he’s learning that he can tackle them in the same way that he tackles smaller numbers.

As adults we’re sometimes faced with big problems that seem intimidating at first. However, it is often the case that the techniques that we use to solve smaller problems work perfectly well on their scaled-up cousins. Don’t be intimidated! Just take things one step at a time.

You can only be loved to the extent that you are known.