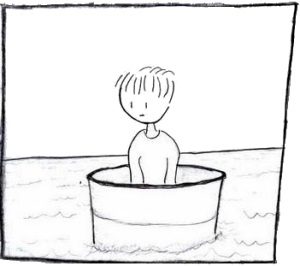 We all face times in our lives when unexpected events leave us feeling off-balance, lost and confused. This guide can help you cope.

Crisis occurs when an unexpected event upsets our equilibrium, and is usually accompanied by a sense of bewilderment and confusion. The causes of crisis are various. Sometimes the cause is a physicals event such as a fire, an accident, a physical attack or a sudden illness. Sometimes it follows an emotional event: someone has let you down, or abandoned you or betrayed you in some other way. At other times it may result from a financial catastrophe, or a challenge to your deeply held beliefs, or the death of a loved one. Even good things can leave you feeling all at sea: a sudden windfall, the birth of a child or a promotion at work, for example.

The good news is that there are some basic steps we can take that can help get things back on track. An enormous amount of research has been done on the ways in which survivors behave in order to get through major a catastrophe and disaster. The lessons learned from this research can help us deal with more subtle crises, too.

Here are some things that I’ve found helpful:

It is not unusual for us to ignore the signs of impending crisis.

My wife and I were once in a shopping-centre café when the fire alarm went off. The strange thing was that nobody moved. All the other customers carried on eating and drinking as if nothing was wrong. Occasionally, people looked around to see if anybody else was leaving, but as neither other customers nor the staff were bothered by the alarm, everyone assumed that it was a false alarm. They just ignored the ringing.

The thing that frightens me about was this? I behaved in exactly the same way.

It transpired that there had been a few false alarms in centre over the last few months, so the staff assumed this was one, too. It was only after a full 15 minutes that the staff realized that this might be a real incident told us to evacuate. Even then, we were worried about not finishing the drinks that we’d paid for.

Now, I’ll bet you’d love to know if we right to stay, or if this was a real emergency? Frankly, it doesn’t matter! We had reason to believe that our lives were at risk, but did nothing about it.

What I learned from this is that we need to be vigilant for the signs of crisis, and be ready to take responsibility for our own safety, no matter the actions of the crowd.

In films, crisis is often greeted by panic – people screaming, running around “like headless chickens” and making irrational decisions. In reality, however, that is rarely what happens. The disaster survival literature suggests that a common reaction to a catastrophe is just to freeze up, like a rabbit caught in the headlights. People just stand still and go eerily silent as they try to process the new situation.

Unfortunately, this isn’t a good strategy for survival. The people who survive disasters are people who take action to protect themselves – the people who leave the sinking ship rather than waiting for instructions. In the same way, your ability to act may make all the difference to how intact or damaged you are following your crisis.

So, instead of trying to figure out what’s happening on a wider scale, deal with your immediate situation.

If there are decisions that you need to make in order to get through the crisis then make them. At the same time, beware that a crisis is the worst time to make important decisions that don’t pertain to the crisis itself. So, don’t agree to marry someone just because you’ve been through a trauma together. Instead, wait until the crisis is over before you agree to tie the knot.

So, you feel like you’ve lost the plot? The good news is that there never was a plot, or rather, the plot is the one that you write yourself through your own actions. And there is nothing to say you can’t go on writing it. So, now that you’ve evaluated your options, it is time to take action. You don’t need to plan everything in detail, you just need to do the next thing and learn from it as you go along.

But do keep re-evaluating. If you blindly peruse your first idea without checking that it is still viable then you’re likely to get into more trouble. So, keep your eyes open, but keep moving.

You don’t have to be alone! There are lots of avenues to explore when looking for help:

Talk to Friends and Family

Even if people don’t have answers, a good talk can often make the path ahead much clearer.

The ear of a friend can turn night into day.Kramii

Another place to get help is from other people who have been through something similar. Do use your judgement over whether any particular group will help you out or make things worse – there is no value in joining a pity-party. On the other hand, getting together with people who have found ways of coping under similar circumstances is often the best thing you can do right now.

Lean on the Experts

You find that there are experts available who are trained to help you deal with your present crisis. For example, if your plane is going down, look to the air crew for guidance. If you’re in financial straits, get in touch with a debt counsellor. If you’ve won the lottery, call an investment advisor.

One word of warning, however: that there is a big difference between a counsellor and a salesman, but it can be easy to mistake one for the other.

I personally find prayer helpful, and have often received answers amidst crisis, both in the form of insight and practical help.

In the midst of a crisis, it is often difficult to deal with life’s basics. If you’re in immediate physical danger, make this your priority. From there, remember that you need to take care of your other basic needs – you may not feel like eating or sleeping, but you’ll perform more effectively if you do.
So:

Leave Your Baggage Behind

One of the challenges of crisis is that, under stress, it is difficult to prioritize properly. A surprising number of people have lost their lives in airline disasters because they can’t bare to leave their hand-luggage behind.

There are often things that you need to sacrifice when you’re dealing with a crisis because you have more important things to deal with – it won’t kill you to go to work in a crumpled shirt or with a little stubble, for example. Don’t worry – you can put things back to normal once the crisis is over.

Remember the People Who Matter

Tragically, people have been known to leave their loved ones behind in the confusion following a disaster. So, make sure that everyone that matters to you is with you and travelling in the same direction as you. To do so, you need to focus on the people you care about.

Indeed, one of the things that motivates people to keep going in a crisis situation is the thought of their loved ones. Even if you don’t have people who need you right now, you’re sure to have in the future, so hang in there – for them, if not yourself.

You will be secure, because there is hope;
you will look about you and take your rest in safety.Job 11:18

I found the following useful in preparing this article:

When opportunity comes it’s too late to prepare.

— John Wooden, Hall of Fame basketball coach
We use cookies to ensure that we give you the best experience on our website. If you continue to use this site we will assume that you are happy with it.Ok