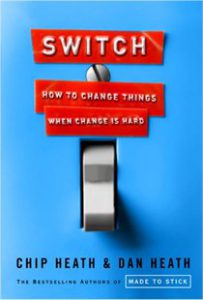 A summary of “Chapter 1: Three Surprised About Change”, from “Switch: How to Change when Change is Hard”, by Chip Heath & Dan Heath.

In their book, “Switch: How to Change Things When Change Is Hard“, the Heath brothers present a framework for effecting change, whether at an individual, organizational or societal level. The crux of change, they argue, is to get people to behave differently:

Ultimately, all change efforts boil down to the same mission: Can you get people to start behaving in a new way?

The first chapter outlines an approach to fostering behaviour change that will be expanded upon throughout the rest of the book. It introduces this approach by outlining 3 “surprises” about change:

To explain their model of change (and to make it memorable) Switch draws on an analogy drawn from Jonatham Haidt’s book, “The Happiness Hypothesis”:

Change is hard when the rider and elephant are pulling in different directions, but that is becomes easy when they work together.

A reluctant Elephant and a wheel-spinning Rider can both ensure that nothing changes. But when Elephants and Riders move together, change can come easily.

Expanding upon this model, the book suggests that the Elephant and Rider are negotiating a Path, which represents the direction that they must take through their environment in order for change to occur.

Each of the 3 aspects of this metaphor is used to explain one of each of the 3 surprises about change that were mentioned above, and corresponds to one the 3 parts of the model for change presented by the rest of the book.

The first part of the model presents principles that will help motivate the Rider.

The Rider provides planning and direction, but is prone to over-analysis. As a result, the Rider tends to hold back when uncertain how to proceed. So, “what looks like resistance is often a lack of clarity”.

Provide crystal-clear direction to the rider.

If you want people to change, you don’t ask them to “act healthier.” You say, “Next time you’re in the dairy aisle of the grocery store, reach for a jug of 1 % milk instead of whole milk.”

The second part of the model concerns how to motivate the Elephant.

Although the Elephant is the source of energy and strength, the one who actually gets things done, it can be reluctant to follow the path set out by the rider.

When people try to change things, they’re usually tinkering with behaviours that have become automatic, and changing those behaviours requires careful supervision by the Rider. The bigger the change you’re suggesting, the more it will sap people’s self-control.

Psychologists have discovered that self-control is an exhaustible resource

As a result, the Rider can’t get his way by force for very long, because, “what looks like laziness is often exhaustion”.

Students are presented with two bowls, one containing fresh-baked cookies, the other radishes. Some of the students are asked to eat cookies but not radishes, the rest to eat radishes but not cookies. When the researchers are away, the radish-eaters resisted the temptation of eating cookies, whereas the cookie-eaters didn’t experience much temptation. Then both groups were asked to do logic puzzles, which have been rigged to be unsolvable. Cookie-eaters try for an average of 19 minutes before giving up, whereas radish-eaters try for just 8 minutes. The radish-eaters ran out of self-control.

Gloves on a Table

A manager believed that his company was wasting vast amounts of money, and took an unusual approach to persuading others of the need to change. Rather than endless PowerPoint slides full of depressing statistics and charts, he piled gloves on conference room table. He had discovered that his company bought over 400 different kinds of gloves, different buyers paying between $3.50 and $17 for the same gloves. People throughout the company found he glove-display compelling, and were motivated to save a lot of money.

While the first two parts of the model deal with engaging the agents of change – the Rider and Elephant – the the third addresses the “path”. It provides guidance on how to change the environment to make the process of change easier.

People’s behaviour is partially shaped by their environment.

A study was conducted into eating habits. Movie-goers were provided free popcorn in differently-sized buckets. The people with larger buckets ate more than those with smaller buckets.

Limitations of the Approach

The authors recognize that the framework for behaviour change that they outline in the book is “no panacea.” Specifically, they note that their approach:

Nevertheless, they say that:

We don’t promise that we’re going to make change easy, but at least we can make it easier.

2 thoughts on “Summary of Switch Chapter 1: Three Surprises About Change”