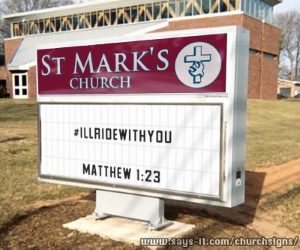 This is the Christmas that the #IllRideWithYou hashtag went viral.

On Monday December 15 2014, at a café in Sydney, Australia, a lone gunman took a number of hostages. After a 16-hour siege, police stormed the building. The gunman and two others were killed.

Early on during the incident, hostages were forced to hold up an Islamic flag in the café window. Concerns about an anti-Muslim backlash grew.

As news of the hostage siege broke, a post by Twitter user Rachael Jacobs got noticed. Jacobs said that she had encountered a (presumably) Muslim woman at a train station who was removing her hijab. She posted:

I ran after her at the train station. I said ‘put it back on. I’ll walk with u’. She started to cry and hugged me for about a minute – then walked off alone.Rachael Jacobs

Moved by Jacobs’ story, Facebook user Tessa Kum decided to take a stand. Offering to sit next to members of the Islamic faith on public transport, she posted a message to those who took her regular bus:

And so the #IllRideWithYou hashtag was born. It was soon picked up followers, with fellow Australians offering Muslims lifts to work, promises of support and of protection.

It just seemed that a simple way of promoting kindness would be to say if anybody catching public transport didn’t feel comfortable just because of what they were wearing, I would sit next to them, so they weren’t alone.Tessa Kum

Since then, the #IllRideWithYou hashtag has gone viral. Featured in hundreds of thousands of tweets, the hashtag has been picked up by celebrities, news agencies and thousands of ordinary people who want to speak out against prejudice.

To me, this is the perfect illustration of the real message of Christmas. Instead of condemning those who dared to disagree with him, God stepped down from heaven and made this offer to each of us: #IllRideWithYou.